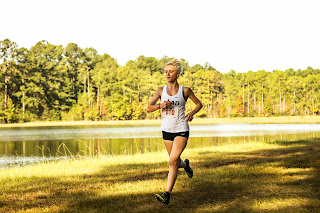 So here is really a tale of two cross-countries; the yankee sort and the Manchester sort. Having not long arrived home after a busy season in ATL, I got dragged out of my nice warm bed (too much of that going on recently) to go leg it round some muddy field just beside the motorway in Manc-land. It was cold, it was rainy, it was grey. Lovely stuff. Not quite what I've acclimatised to - you can see the difference between the conditions in the photographs. One is lovely and sunny, pleasantly warm, not an inch of mud in sight. 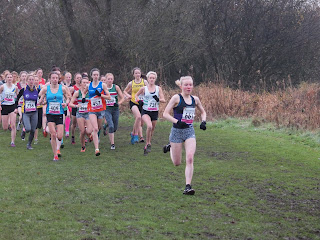 The other is some sort of Northern wasteland suffering from classically northern winter weather. Both have their merits, and honestly I prefer British XC, but I can't pretend that as I shivered on the soggy starting line I wasn't just a little nostalgic for my American stomping grounds.

But yeah, XC at home is much more fun, and much more hardcore than the sort across the pond, and I think the longer distance and emphasis more on being fit than on being speedy suits me more. So I won the Manchester League! That was unexpected! Taking the front halfway round the last lap came as a total surprise to me, as did the girl behind's reluctance to hurtle past me in the finishing section, but there we go. Who'd have thought I'd ever do that?

I confess, I've gone weak and wussy out there in Donald Trump land. I thought the course was pretty muddy and quite difficult to run properly on. My mother has reliably informed me that I am an American wet lettuce, and the terrain was wholly run-able. Having seen Arrowe Park after the race last weekend, I'm starting to think she might have a point.... 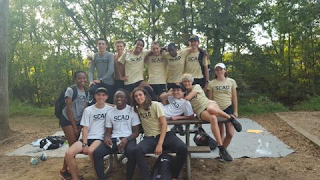 So, our season. A bit of a mixed bag, to be honest. The guy's team had a pretty good one I think. They finished well at Conference, and Dax placed high enough to come to Nationals with us! He ran really well at Nats as well, finishing inside the top 100, which is really great for a fresher. His family are the sweetest as well, they've come to nearly all our races and bring us nice treats for afterwards (so obviously they're very popular).

On the girl's side we didn't win a single race as a team- even ones we did win last year when (on paper at least) we had a weaker team. 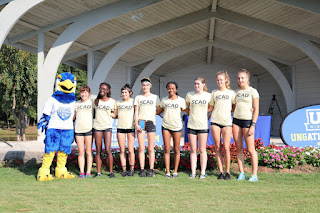 This is us, second at UNG....won that last year. I think it's fair to say that some of us were lacking in team unity and combined work ethic.

I had a pretty good season. I won some stuff, I set some course records. I broke the school record twice. I think the highlight of the season was running 17.05 at Sand Shark, which took 9 seconds off the previous course record there. That's quite good, because the record had been set by Hannah Segrave last year, who came third at the European U23s this summer in the 800. It was dead annoying though, because I finished over a minute ahead of the next girl, and I totally would have run under 17 if there had been any sort of person to chase or to try and escape from, or anything! Also very annoying because I'd been so close to breaking 17 a few weeks before when I did 17.07 at Royals. It's a bit ungrateful to be mad about winning, but I was cross.

We ran a 6k this year, that was an exciting adventure. Most of the NCAA schools do 6ks because that's their championship distance (bit random). 6k is a rotten distance. It's fast like a 5k, but you have to go further. Coach absolutely terrified me beforehand talking about how one time he'd been at the course we were going to and there had been deer all over the starting field as the race went off. Scary stuff, having to charge down the deer. There weren't any that day, but we did run into a herd of them one time when we were out doing our long run. There are a load of trails behind the main path at the river and we toddled off along one, turned the corner and crashed into these animals. Very worrying indeed when you're not expecting them to be there and then they are there, bouncing all over the path and flashing their antlers (I survived).

Last year's XC season seemed to fly by, I guess because it was all new. This year's seemed to drag on a bit, probably because I knew exactly what was coming. 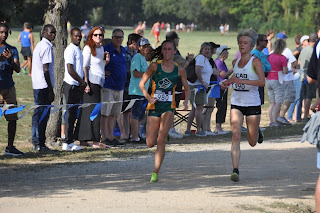 A lot of the courses were the same as last year's schedule, but of course not all the same people enter and hopefully some of the runners are in better shape than last year, so the races are never the same. Like this one, a snazzy picture of me looking absolutely exhausted. I was. This was the 17.07 race, a solid 14 seconds off my 5k PB, so I think I was allowed to look a bit knackered. This is Royals, in North Carolina, which last year I won but in a much slower time. This year, the other girl here got just a second ahead of me- I just could not move any faster at the finish. 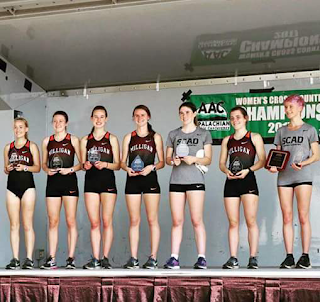 Conference was not in the same place as last year, which was quite upsetting. It was in fact in the same place as our very first race last year, which is not a brilliant course. Here are me and Maddie making a spirited attempt to break into Milligan's social media. People might remember from last year; Milligan are our sworn rivals. They're lovely girls, but we must try and beat them at all times. Last year we edged them at Conference by two points. This year they battered us (team work ethic disaster), but I won it and Maddie had a fantastic run for third, so that was good. The rest of the first seven, who get 'All-Conference' prizes were Milligan's counting team, so obviously we didn't stand a chance in the points.

Luckily, even in second we got a bid to go to Nationals, ranked 16th in the nation. Last year we went in ranked 10th, our place having moved up and up all season. This year we'd gone steadily down the rankings, but at least we were getting to go. And go all the way to the other side of the country! Vancouver, Washington State! Very exciting.

It's a bit sad, but for me one of the coolest bits of the whole trip was stopping over in Salt Lake City, Utah. It was AMAZING. The city huddles against the back of the Rocky Mountains, which are just these enormous, harsh, spiky things that go on for ever ever, like it's trying to hide from the massive lake but can't run back any further. It doesn't look like it ought to be there- the whole thing looks like something from a SciFi film. Awesome. And then there are mountains coming out of the lake, and the whole thing is just crazy. How did people survive trying to cross that landscape without aeroplanes or cars or anything? 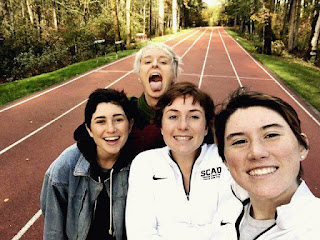 We got to Portland, which is basically the same place as Vancouver, just across the state line, and we did some exploring. We'd all chopped our hair off, possibly in honour of the occasion, or possibly just because, so we are now the SCAD ATL boy's XC team, and here we are at Nike World HQ! It is such a beautiful track. 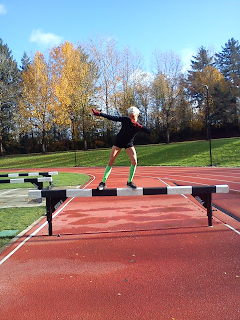 We had a little run around it, and I did some balancing. Greta, who ran with us last year is now at uni in Oregon, so she came to visit. The US is so enormous it has multiple time zones, so we were all very confused as to why we were feeling very tired at 7pm, but really it was more like 9 or 10 for us.

Very exciting news though. I got voted the Southern runner of the year for the NAIA, and got a massive piece of glass for it. The people in charge of the event at Nats had organised a massive dinner the night before, so they called you up to get these things in front of nearly everyone who would be running the next day...no pressure at all! 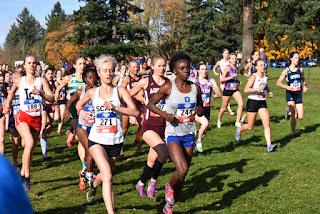 So here's me doing something attractive with my face not long after the start of the race. The girl directly beside me went on to win it. I had a bit of a shocker. Not long after this photo was taken I think I must have twisted my ankle and spent the rest of the race limping with a stabbing pain in my calf. Very, very upsetting. On the plus side though, Maddie ran a brilliant race to finish within a few seconds of being All-American, and somehow the team pulled through to 8th, which was something of a nice ending to a disappointing season.