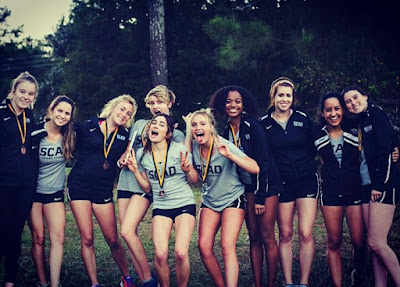 It's us, last race! I promise you I am more tanned than I have ever been before, but I still look ghostly pale, damn it.

We have been practicing hurricane survival recently. We're too far inland to be bothered by that kind of thing, but Savannah got hit, so we've had several thousand kids from that campus sleeping in our classrooms, eating our food and so on. It's like a refugee camp in school. Last weekend we drove up to North Carolina, which took a very long time, and we had hurricane rain all the way. Thankfully when we actually got to the race it was only moderately soggy.

Damp, see. NC is a strange place, full of churches built like warehouses, and at least one warehouse that was an old church, and giant red glowing crosses all over the place. Charlotte, the city we were going up to, was another strange mix of massive MASSIVE beautiful houses and some really slummy-looking places, all piled in together. It was also full of people who had run away from Florida. Why would you live in Florida? The houses must get trashed so often.

This was our first serious race. It would have been Nationals Preview, but Nationals has moved, so it was just a big race instead. Nationals Preview is the kind of abomination only the Americans could dream up- it's a race supposed to be run on the same course, with all the people who think they might qualify for Nationals running it, but none of the championship glory. Because this was no longer Preview, and because of the lovely hurricane, quite a lot of the really good teams just didn't show up, including our big rivals, Milligan. Apparently we've scared them to death. Somehow they're still quite a bit ahead of us in the national rankings- how I don't know, because we're much faster, but they seem to be avoiding us, probably to preserve that ranking. 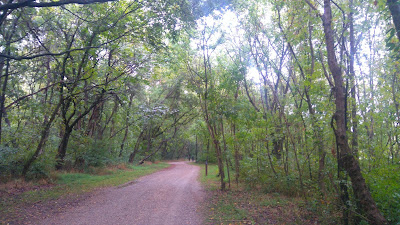 It was quite a pretty course. Some bits were very long and straight, some quite twisty and turny, but it was very flat, and nearly all gravel paths. The start was quite scary; the ground was a bit treacherous on the 600m or so of starting field as nearly 400 girls hurtled to the front. Coach had told me beforehand to try and stay with the leading pack but not lead it, so it was both surprising and concerning to find myself leading a race where I thought there were going to be at least three girls quite a bit faster than me. Turns out, they weren't there. Basically I ran the whole thing in a state of shock, wondering what was going on. I won it in the last 300m and was very, very surprised about it.

Everyone was amazed with me, but I only did 17.32. Which is fast, I know, but I can't help but be a little disappointed with it. I really want to be under 17, and with about 400m to go Coach was yelling at me that I could do it. Or I think he was. I could very easily have misheard, because I was working very hard at that point. But yes; four wins from four. Not a course record this time, and still not a glorious champion t-shirt (cries). 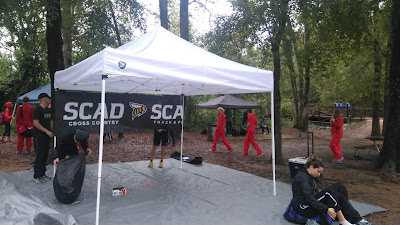 We've finally got a tent! We needed it, it got pretty wet as the day went on! 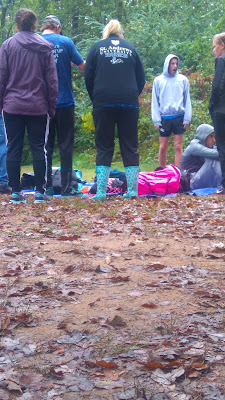 And look at these imposters! St Andrews, my bottom. 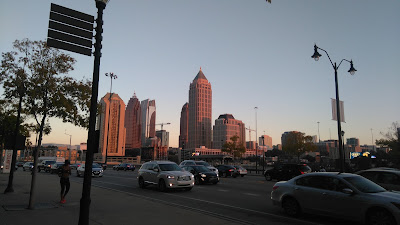 Back in Atlanta the weather has calmed down. It rained over the weekend (damn hurricane), but now we're down to a very, very nice British summer's day. There's a bit of a breeze, it's no where near as humid, and the heat is no longer like a blanket trying to suffocate you. The British press are reporting about how shocked everyone is about Donald Trump and his terrible misogyny, but over here nobody seems to be talking about it. They don't seem to talk politics much at all generally. It's kind of like that feeling before the Milliband/Cameron election, where nobody liked either of them, only here they don't have the Liberal Democrats as a third option.

We've not been doing much, just training. We went to Gay Pride at the weekend, which was kind of how you would imagine it to be. Glitter, feathers, people not wearing enough and lots of prancing. The guys were trying to prevail upon me to try American festival delicacies. Funnel Cake? What is a Funnel Cake? It looks like one huge, gigantic churro that takes up a whole plate in it's layers of squiggly fried cholesterol. It's just like festival food at home really, but bigger and greasier. I declined. There's a bug going around the team, which I am desperately hoping to avoid. I feel a bit off, but I really, really hope it'll just pass and not become a serious problem.