Halloweekend is apparently a legitimate phrase around here. People are far too excited about it, but I guess they don't have Bonfire Night, so something has to compensate. Some of the houses really do look amazing, with fake cobweb and massive decorations on the lawn, and millions of pumpkins all over the place. Everyone in college seems to be making plans for parties and trick-or-treating and it's bizarre, because I can't remember the last time I went out to canvas sweets on Halloween, but apparently that's a normal thing for 20year olds to do here. 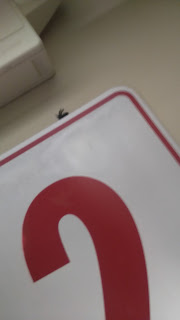 Someone in this building has a sick and twisted sense of humour. These great
big, fat plastic spiders are all over the place. It's really not cool. Every time I see one I think it's real. My nerves will not survive Halloween season. 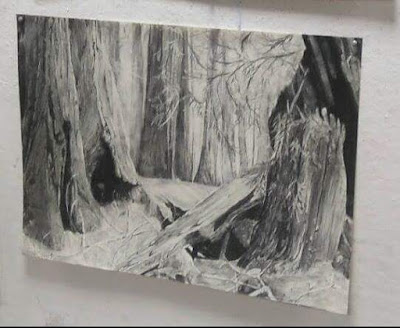 This one is my latest piece of drawing. Charcoal; not my favourite thing to be using. It gets everywhere! I'm sure there was charcoal dust in my eyes, making me itch. And it took so, so long. He had us draw from a very out-of-focus image which gradually sharpened up, but that only works if you draw reductively-  put in lots of dark bits and then rub out, and I can't get my head around it, so I started again when I got home. But still. SO LONG. He had better give me a decent grade. 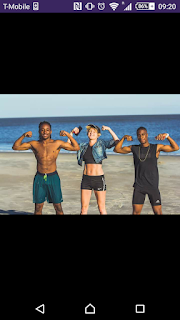 This one came off my phone, so it's a little photo in a big screenshot, but it's still really funny. When we were at the beach last week the boys were doing muscle poses, and I joined in because I definitely lift... The impact my definitely impressive and not at all spaghetti arms would have had on this picture is somewhat mitigated by my jacket, unfortunately. 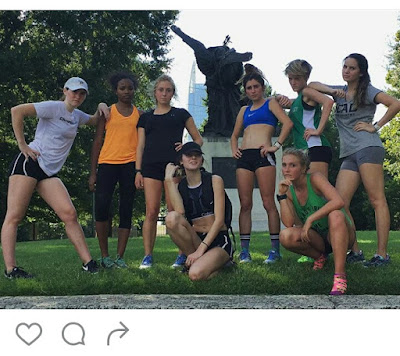 And the squad! We had to take a death stare photo for some reason pertaining to Liz's ex boyfriend, which was surprisingly difficult to do without laughing. This one has been a pretty heavy training week; our last week before Conference! That's come around so quickly. We've been doing more fast, shorter things, rather than 1600s and tempo runs all the time. This week it was 800s on Tuesday and 1000s on Thursday. Thursday was actually really hard work, but we managed. Today we went on a bit of an adventure, to a very hilly park for our long run, to get in a bit of hill practice before next weekend, when the course is supposed to be quite tough. Anyone who knows me will know I dislike running uphill, so I've been trying to get in more climbing whenever we've had a run for a few weeks now. Hopefully it'll pay off.