Emily and the Flood 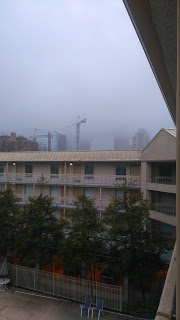 This morning we awoke to rain on an almost Biblical scale. It is absolutely chucking it down, bouncing off the pavements and generally causing chaos. There was a thunderstorm (tropical storm, more like) earlier as well, which was the real reason I woke up at all. I think this is only the second time I've seen any rain at all in Atlanta, so maybe it feels like it's got to make up all the lost opportunities. It did rain overnight the day before yesterday, and all the grass started to turn green again, like those quick-blooming plants that put out flowers for two days after it rains in the desert. Coach had been telling me that the winter weather here is very unpredictable, and I hadn't really believed him (it's been consistently very hot), but this is almost like being back in Edinburgh.

Today is also SCAD Day, which is like an open day. They are trying to show off, so instead of our usual brunch food, the menu this morning included 'Spinach salad with cucumber, oranges, dried cranberries, corn and a champagne vinaigrette'. Champagne?? They have flashy prospectuses and t-shirts and all sorts going on, and some poor person dressed up as a bee wandering around. I never knew we had a mascot. That would have been a great thing to have at our home XC race!

On Thursday we had a pep rally. This was not something I had ever heard of before, but Wikipedia informs me that these are events, typically held for students before a sporting event to encourage school spirit and enthusiasm for the sporting season. Cheerleaders and bands are usually involved. We don't have cheerleaders or bands, so all the sports teams lined up outside the canteen, and walked through chucking t-shirts at the assembled non-sporty people while Glenn read off some of our achievements from the previous season. It was a slightly mystifying experience, not least because of how crazy some of the audience were going. We wished we'd got to keep the t-shirts instead.

Yesterday we had a local fashion designer, Megan Huntz, come in and speak to us. She was really interesting; she spoke about what is known as 'Slow Fashion', which really means a focus on working locally, to help boost the local talent and creativity of a place, and to minimalise environmental impacts. Her collection was really nice, and she is obviously very talented, but I can't help but feel that trying to do something pretty high-fashion in Atlanta, which is not really known for that sort of thing, and working in a way that means your costs and prices are going to be high, means that your business and brand are going to grow very, very slowly. And environmentalism and working locally are very fashionable in many ways currently, but who knows how long that will continue to be a selling point? She spoke about how she was committed to very high standards of craftsmanship, and wanted to create pieces that women could hand down as heirlooms to their daughters, but while her creations are very beautiful, they're also very modern, and probably are not the sort of things people will be wanting to wear in 20 or 40 years' time.