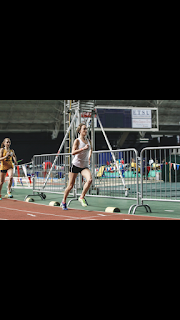 We had our first indoor race! Coach says there isn't an indoor one in Georgia, so we have to go adventuring to find them. This time we went up to Johnson City, Tennessee, which was a looooong drive- but not as far as the one we're doing next weekend to somewhere in North Carolina. The Johnson City track is really daft; the building looks like an aircraft hangar, but it's really a massive basketball stadium with a track around the outside of the courts. Consequently, the track is a squiffy length - 280m?! Doing the 3000 was all sorts of no fun. 10.7 laps. They have some bloke shouting out 400m splits, but he's pops up at random unexpected intervals and it was difficult to keep track of how far I'd gone how fast. 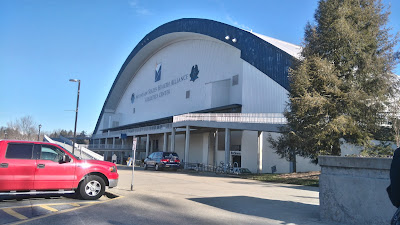 So here's the outside of the building. It doesn't look so big in this picture, but honestly it was HUGE. Really like something you could keep planes in. 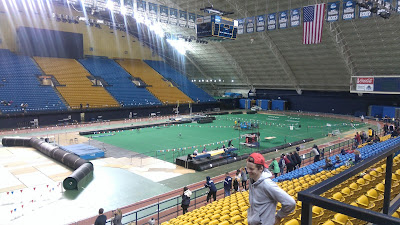 And here's the inside of it. It was a pretty skinny track, it didn't have a load of lanes, so the sprints had about fifty heats. The actual meet went on for days, but we were only there Friday, Saturday. My race was very nearly last thing on the programme on Saturday. We got there at around 9, so I sat around worrying about it all day! In the end it was a bit of a disappointment. I won it, and I qualified for Nationals but my time was slooooooooow. Still, next week we're on an actual 200m track, so keeping an eye on distance/time ought to be a bit easier. 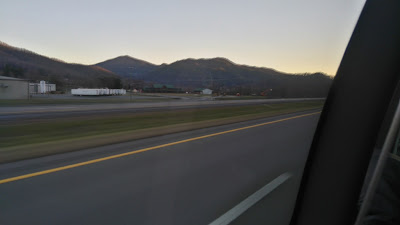 Here is a bit of roadside Tennessee. It was completely beautiful; great big hills all over the place catching the sun in the evening. We went down this road that was a lot like when you're driving in the direction of Colwyn Bay and you come out between two hills and there's a Welsh plain and then some more hills in front of you (dad ought to know what this means, if no-one else does), expect these hills and the length of the road we were going down, and the hills in front of us were all much bigger. 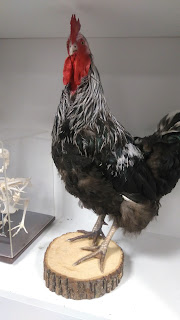 Back at school I have just survived all my Mid-term due dates. I don't know why, but I seem to have so much more work this term than last. It's quite welcome really, because I spent a lot of my free time last term sunbathing, but it's too chilly for that currently! I've been spending a lot of time in the creepy animals room. We have a whole room full of taxidermy creatures, like this voodoo chicken. I was in there by myself yesterday, and it was uncomfortable. So many dead things. They have a load of dismembered heads on the wall as well. For our last project, our professor directly forbade us to use photographs, insisting we draw "from the live object". Sir....there's nothing live about it!