Not the All-American Rejects 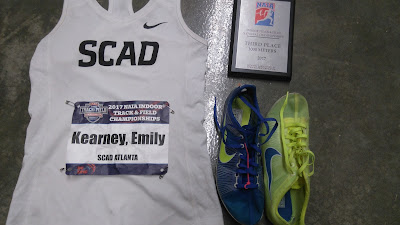 We went to Indoor Nationals! Back in Tennessee, on that terrible round-the-basketball-court track that we ran our first race on. 280 metres, honestly. They give you some poor lad who has to run around and pop up at the 400m marks to yell your times at you, but you kind of lose track of how far you've gone, so it doesn't mean very much. You have to try and listen out for your coach yelling "that one was too fast" or "you're right on pace" or (worst of all) "you need to pick it up", but there are so many people in there all shouting and clapping and generally being noisy that you struggle to pick out individual voices. 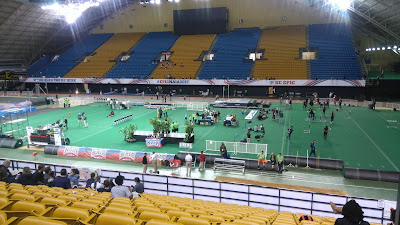 This is what it looked like inside. They put up great big 'Be Epic' NAIA banners all over the place, which made it look a little bit less like a massive basketball arena. It was a long weekend; we left on Thursday morning and got back late Saturday night. It's a pretty long drive up there, about five hours, but it is soooooooo pretty. We got to go up the mountain road again, and it was daylight this time so all the hills looked blue. I love that road, it almost makes me wish we could spend ten hours in the car every weekend.

NAIA Nationals indoors is a bit like the English Schools. We had to run 10.28 for the 3k or 18.18 for the 5k, and a lot of the people there had just about made those times. There were two heats for the 3000; first four from each heat went through, followed by the next fastest four times. The heats were won in 10.14 (that was me) and about 10.20. We had to run on Friday and then finals on Saturday, which seemed a bit mean because the 5k people got a day's break between races.

Our final was A LOT faster than the heats. A girl in orange took out the pace on the first lap, and we did 75, which was a bit quicker than I had planned to, but not really a problem because what Coach and I had really not wanted to happen was (as went on in the heats), a slow start with a crazy sprint to finish. Basically we just carried on being fast. It was won by a girl from OCU, who was easily the pre-race favourite. She was very annoying. She kept talking, possibly to her team-mate. Seriously though, if she can be talking through that then she ought to be further in front. I came third, and I ran a new PB (9.48), so that was great, and I'm now an All-American!

Greta was running in the 5k, and she did really well, coming in seventh overall. The 5k was a mad race; the heats seemed to be really fast, with quite a few girls running times much faster than those they'd qualified with. In the final, two of them completely took off, and it was won in 17.01, which was nearly half a minute faster than anything that girl had run all season. Great to watch, but it was a surprise. 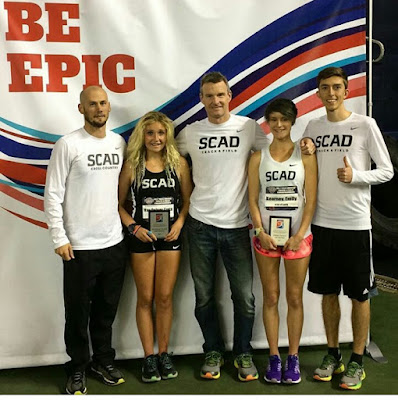 Here we all are afterwards; Brandon, Greta, Coach, me (repping the non-SCAD shorts!!!) and Josh. Coach obviously had to come with us, but Brandon and Josh are an absolute pair of heroes for driving all the way up there just to yell at us for a few minutes. 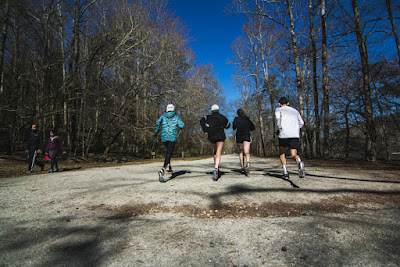 And away from Nationals, here are some of us clearly running away from our finals. Who wants to do finals? Definitely not me. I've got some mad drawing nearly the same size as me to do.....yikkkkkkesssssss. At least it's nearly Spring Break, although that means outdoor track, and everyone who knows me knows exactly how much I love that. Hopefully at least I'll get a bit faster. We convinced Coach to rent a beach house for Outdoor Nats, so I better qualify!
Posted by Unknown at 12:46