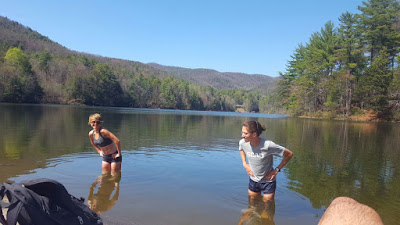 I feel like not much has been happening recently, although that's probably a good sign, if this is becoming my normal life.We've had some nice weather (like the day in the photograph) and we've had some disgusting weather (the humidity is back with a vengeance).  After our last race, Foon, Max and I went up to the hills for some running and annoying the fishers and sunbathing, pizza and general good craic. It was quite upsetting actually, because the last time we were there, there was literally no-one else. Once we got off the road, we didn't see another person for hours. This time, half of Georgia seemed to have had the same idea as us, and they were all up on the trails driving around or camping or whatever. There was one particular lorry-load of chubby women who drove past us three times during our run! We went back into Helen and ate pizza, and then went and stood in the lake, just to upset the anglers who were failing to catch any fish. There was a little sign saying 'no swimming', but we were actually icing our legs. 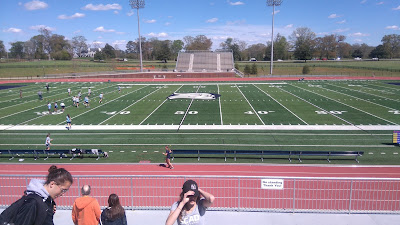 This is Valhalla. No pets allowed in Valhalla, there's a sign that says so on the gate. You know how all the American colleges have mascots (usually animals); so we're the Bees, our bitter rivals Milligan are the Buffaloes- Berry College, where we were running, are the Vikings, so their stadium is honestly called Valhalla. Berry is outside a place called Rome, which is about an hour's drive from a place called Athens (top marks for originality there America), and it is right in the middle of the rural bits of Georgia. Like Gone with the Wind, all rolling grass fields, dark pine trees and bright red soil. In the very background you can just about see the American equivalent of a stately home- a big white house with pillars and verandas and beautiful gardens. It was a nice track, although apparently it's always windy there, kind of like at Wavertree. I got to do my first track 5k, lucky duck that I am. It wasn't very great. 5k is not a long way, but it feels sooooooo much further when you're just going around in circles. I did 17.24, which at least was a qualifier for nationals, but pretty disappointing either way. 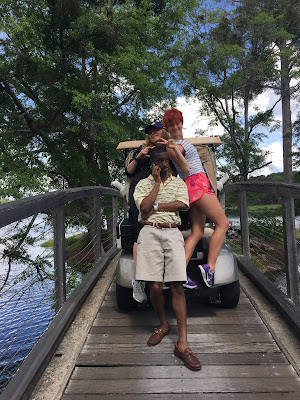 Last weekend was Easter of course, and me, Maddie, Olivia and Jaylon went to watch his beautiful girlfriend and the rest of the SCAD golf squad play. Golf is a bit boring, but golf carts are a lot of fun. The Americans don't really seem to do Easter eggs in the same way as us, instead they get little plastic eggs and fill them with sweets. They have creme eggs, but they're not the same and they're not nice. We took lots of plastic eggs and hid them in the golf carts for the golfists to find. We're pretty sure we found a cabin in the woods that someone died in, I got a spider on me, Olivia got a tick, and we all got scratched by thorns. There were lots of plants on the golf course, and we found strawberries and raspberries and spring onions, which for some reason the golf girls were very impressed with. Is knowing what a spring onion looks like really that impressive? This golf course had some interesting features that I never thought anyone who played golf would have dreamed up. The bridge we are posing on goes to a little island, from which one must shoot the balls across the lake and hope they don't end up in the water. Jaylon is a really terrible driver, so Olivia and I had to strap ourselves on to the back of the cart like some luggage, and she still managed to fall off. Golf is a terrible sport, because you have to stay very quiet while they are aiming and whatever. We are not very good at being quiet, but at least we didn't get kicked out. Olivia woke up a goose, and we had to run away quickly because it got very angry. 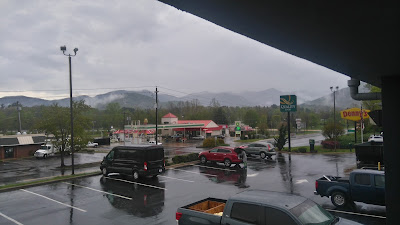 And here is the entrance to Jurassic Park. Back in Montreat, North Carolina for conference on the track. We were actually pretty high up in the hills, and it was raining a lot on Friday, so all the clouds were really low, and billowing through the valleys between peaks. It rained A LOT. We all got pretty soggy. Some of the morons forgot to bring extra clothes, so then they froze. The rain meant that events got delayed by an hour on the track, so we were there very late waiting for the 10k. I don't know how Maddie does the 10k. I really couldn't cope. 25 laps, it would just seem to go on forever and ever and ever and ever. Yesterday was very, very hot and sticky, and I wouldn't have minded a bit of rain. I don't think any of us had a particularly good run, except maybe Adrian, who came third in the guy's 5k. I won my race, but I can't even count that as an achievement given than I was seeded 80 seconds ahead of the next girl. Once again, my time was disappointing.

I qualified for Nationals in both the 5000 and the 1500, and I'm thinking the 1500 might be a better choice. We're going to southern Alabama, where the temperature is likely to get up to 36-37 degrees, and I do not want to do 12 laps twice in that. Plus, amusingly enough I'm actually ranked higher in the 1500...told you my 5k wasn't very good. And I think I could be faster over 1500 yet- I have only done two of them so far. Maddie has the half marathon to qualify for the nationals marathon next weekend, and hopefully I can go see her run. I really hope she does a good time, I don't want to be going to Alabama by myself!