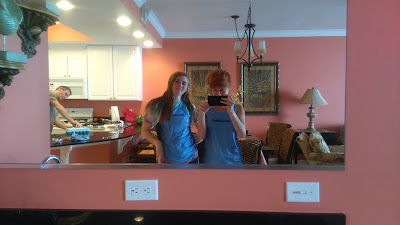 Here I am, in Alabama, with my beautiful Madeline, in our vests that we pinched from Point University. Back at the start of the year, the Coach at Point ordered all their kit, but instead of putting our Conference logo on the back (as you have to) he put a big P for Point, so he couldn't use any of them. We've been trying to get him to give us some all year, at now we finally got them.

Maddie and I were the only two to get to Nationals, and I was very grateful she came because it wouldn't have been that much fun with just me and Coach and Coach's wife. Her fam came along to watch as well. I love her mum very much, and she has a baby brother about the same age as Obi, who was outrageously cute. 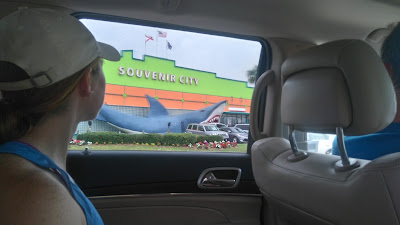 Gulf Shores, Alabama is apparently very typical of American tourist locations. It is a strange town, with one road in, a load of low shack-like buildings on the road leading to the beach-front, which is populated with massive high-rise hotel buildings. Everything is on stilts, because the Gulf of Mexico gets hurricanes. America does tat shops properly. There were at least three of them, including this magnificent example, where you have to enter by walking through the shark's mouth. They all flog pretty similar beach tat to the stuff you get at home, except they also sell hermit crabs with painted shells. They have loads of the little things crawling around in the shop. Poor little souls, it must be a miserable life. 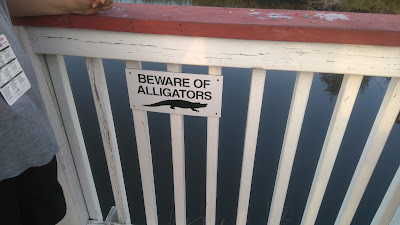 Having left America, I feel very let down at having not seen any alligators the entire time I was there. Maddie saw one, part-way through her marathon, but all I have seen, despite much searching, was been warning signs. How massively disappointing.

Gulf Shores is a very hot place, and for some reason the NAIA seem to want to have the championships in the middle of the day, so it was massively hot and not very nice. I had to run back to back 5ks on the Friday and Saturday, which was fairly terrible, and I didn't do very well, but it was a good experience, and all a learning process for next time. Next year I am not touching the 5k... 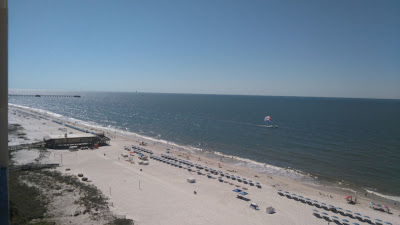 For doing a very good job at the organising stuff they have been awarded the job for the next two years...hurray... Indoor Nationals is going to Kansas, which will be cool. Maybe in my final year we might get to go on an adventure elsewhere for Outdoors, hopefully. But the best part about Gulf Shores is definitely the beach. Beach! So pretty. It was an endless strip of white sand, all warm and lovely. Maddie's family had brought a blow up ring thing so we nearly drowned trying to go over waves on that, and had  great time dodging seaweed and dead fish. They had pelicans, just flying around overhead like seagulls, and our apartment was right on the beach (that picture was taken from our balcony), so all the time we could hear the ocean hissing around. 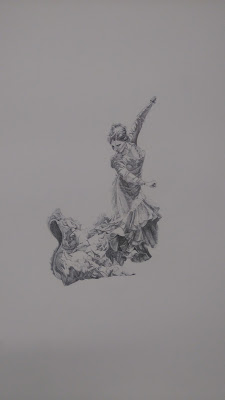 After Nationals, I was terribly busy. Finals for this, that and the other, including this drawing. It took absolutely forever (this isn't it quite finished), and then my professor didn't even really like it! Terrible man, I thought it was quite good. Finals week was mental, I hardly had time to breathe or sleep, but then it was over and it was time to go home. Leaving was quite emotional, I think if I wasn't going back next year I would be a miserable soul now. But I am! So that's alright.

Flights across the Atlantic are terribly long and so, so boring, but at least I did get home fine, and just in time to enjoy the beautiful British summer. Honest to God, I'm not used to this weather. Why is it so windy? I'm living in a polar neck, but I just know that by the time I'm going back to Atlanta I'll have just about adjusted to the British weather, and then I'll have to re-acclimatise to the American stickiness. There is no winning.