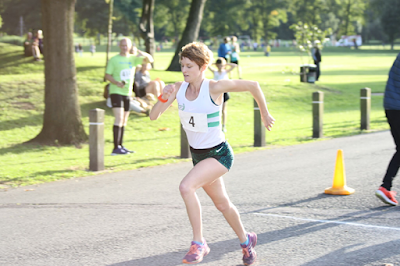 So here I am, back in ATL. I guess this is kind of going to be more a series of reviews than any particular diary of my life back here so far, because we've not been doing all that much.

First of all, this photo. Best running photo of me ever, I actually look like I might be going fast (amazing). Some clever soul with a camera managed to snap this at the exact moment I looked good. Another 0.5 of a second and it would have been back to naff form.... Also, how cute are my shorts? Finally managed to get myself a matching Nike shorts and crop top set and it's beautiful.

This was a fun, fun race. Viking Mile Relays, organised by dad's MRT (yay). I wasn't as fast as I might have liked to be, but I ran my leg pretty much by myself, which wouldn't have helped. It was a really cool event though; we set an unofficial (rats) national record for the mixed 4x1mile relay, which is absolutely mega. On to next year, where hopefully we can be quicker again.

Second of all; I got a new watch! Polar M340 in bright orange (you can see it on my wrist in the piccy). What a good colour, everyone knows orange makes you go faster. It's an absolutely brilliant bit of kit; it beeps both miles and kilometres, which is very helpful because mum does all her group's training in km and I used to have no idea what she meant when she gave me paces because mine is all in miles, it gives me little messages of encouragement! After I do my run it gives me little motivational messages about how I was doing steady state or tempo training and how it's improving my cardiovascular fitness and endurance and so on; very cute. After my race yesterday it told me I'd been doing sprint training! It got kinda mad at me when I was on the airplane, it kept telling me I'd been sat down for too long. Sorry watch, long flight, I can't help that!

Third thing; Hokas! I was curious about these last year, but I'd never seen them at home so I decided against. This season I've got a pair, and they're amazing. They have massive soles, which is wonderful because I think they make me about two inches taller- always a good thing, and despite that they aren't really heavy. I wouldn't wear them to do a session, but sometimes I get sore feet if I'm going for a long run or am on my feet for a long time in a day, and they really help with that. The only thing I would say is that the grips do seem to wear down quite fast. They also make sandals, which Kalie and Olivia have gone and bought... I'm going to have to take a photo of those, they are the ugliest shoes I've ever seen! Massive, thick-soled sandals. Very bizarre. They look a bit like elderly grandparents taking their orthopaedic shoes on holiday to Spain or something. No doubt dad would think they were very cool.

Hurricane Irma; what a nuisance. We've been back here for nearly three weeks now and school still hasn't started because of the stupid hurricane. They had to evacuate the Savannah SCAD campus and bring the people to ours because Savannah was due to get hit, so our classes all got pushed back a week.... And then we had full panic, the whole State of Georgia got declared to be a state of emergency, and on the actual day the storm was meant to hit Atlanta, we got locked in our dorms! Honestly I was worried, mostly because of the talk of disaster and what to do if there was a tornado outside, but in the end it rained all day and that was about it, hurricane over. Katie Clarke said she was pretty sure she'd seen worse weather back in the UK. Having to be inside all day was a bit of a pain, but at least with classes not starting yet, we haven't had to do training at 6am. That starts tomorrow, lucky us. 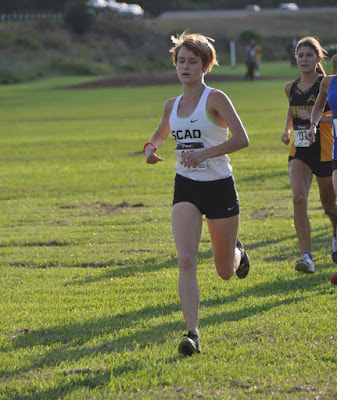 So, races! We've had two now since we got back. Our first was only a few days after flying in and was in Oxford! (Alabama, not too far from us actually). It was a pretty tough standard race, which I think threw us a little, plus it was only a 4k but the course was pretty hard work. They had this strange sort of grass that was full of moss and was kind of like running on sand; it just absorbed all the energy from each step. The grass was also pretty long in places and hid all these potholes. Here is not a great picture of me running, but much better than the one that is on the boy's race report on the website. It was so hot, I'm reflecting the flash with how sweaty I was! Also better than the massively unattractive photo of me at Royals last year they used for our report. I need to get a censorship arrangement for these pictures, I really do.  I had an alright race, I got carried away in the first mile and ended up coming second to the new star of Georgia Tech's squad. The team didn't have that great a showing, but we will get back into it. 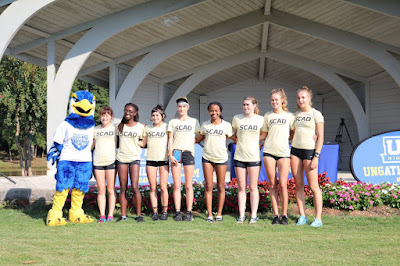 This weekend was the big blue bird race! UNG was our second race last year as well, but they'd changed the course slightly (put some hills in it!) so I wasn't too sure what to expect. UNG's top girl, Brittany, hadn't been too far behind me at the first race, so it was reasonable to presume she might want to try and win it. 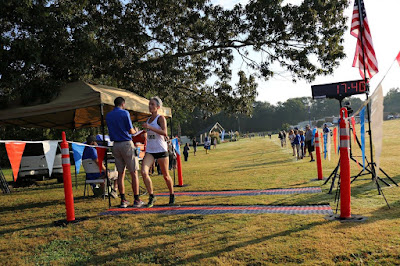 Here's me at the finish, I like this one because even though though Brittany was only about 15s behind, you can't see her at all. I was kinda upset because last year they had a quad bike to show the way on the first lap, and the big blue bird rode on the back of it the whole way round. This time there was just a UNG girl shouting splits at their runners- really not as exciting. Good news though, I smashed my course record from last year; 17.59 down to 17.40, so I have to come back next year and do 17.20. We had a slightly disappointing run as a team, we came second to UNG...again. One single point in it, but it's still very annoying, we ought to be able to beat them. On the plus side, our guys' team had an amazing day. Dax, one of the new guys won the race outright, in his first ever 8k, and they also came second overall!

Everything kicks off tomorrow here. Classes and 6am training (hurray). This week is going to be a tough one before our next race the weekend after next, which I'm really excited for because we're going back to Charlotte, which was probably my best race of the season last year.