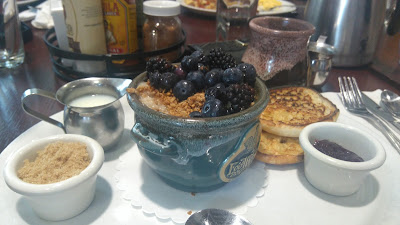 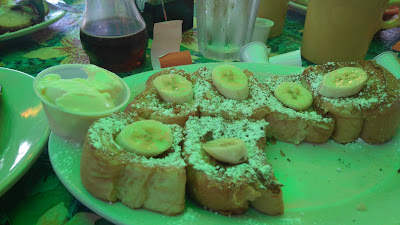 Right, so running to one side for a minute- travesty, I know right- breakfast is so definitely the best thing about America so far. I mean, just look at it. (Before mum has a heart attack, this is from today AND yesterday. I'm not on a massive put on weight mission). But yes, breakfast munchies are fantastic. We seem to be having a lot in the morning, then not really doing lunch and having healthy tea. I'm not really that hungry, I think because of the heat. Also training first thing in the morning means we eat quite late, so aren't really hungry at lunch, and have tea fairly early (then go to bed early as well, yay!).

We went to bed at around 9.30 yesterday, joy of joys. Yesterday was actually a fab day. We went for an easy run in the morning, then had late breakfast (top photo, mega) and then I went with Kalie and Tim to Foon's flat and we spent a few hours in the pool until we were completely 'pruned'. Then we had a team meeting, and got all our kit....so much kit, and had tea at a place called Gusto, which I can only describe as Subway but better.
So training, ce matin. Waking up wasn't as bad as I had thought it might be. We got up at 5.30 to leave at 5.50/6, with training starting at 6. It was honestly pitch black; the sun is rising around 7 currently. We did a loooong warm up and then a 3 mile tempo run around 6.15-ish pace. Quite hard work. The temperature and humidity were not as bad as yesterday, but it still felt a bit like trying to breathe underwater. Then we did a few hill reps, which to the amazement of anyone who has ever seen me try to run up a hill, I was pretty good at.

It seems that most of our training will be at a place called the Oval (no escaping it apparently), which is an approx 800m gravel track. An 800m track. Total abomination. So we did 5.5 laps, and that was 3 miles. Ew. It seems the kind of place I will very quickly grow to abhor. As compensation, it overlooks the downtown skyscrapers, which at that time are all lit up, and it's about as urban beautiful as anything could be. The amount of times I nearly fell on my face looking at the lights...

And later today we get shoes! Hurray! And then a gym workout. Everything is a 'workout' here, and training is 'practice'. Bizarre. The only thing about this waking up early is the day then seems to take a long time- I'm knackered and it's only 12.15. It might not be so bad once we have class, and a bit more structure to the day though. And we don't have to get up at 5-something tomorrow! Hurray!