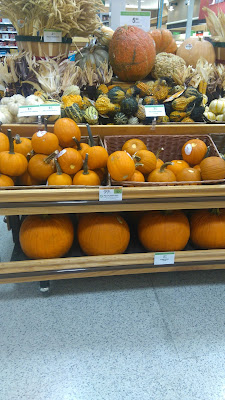 Look at them! So many pumpkins, and it's not even October. And those weren't even all of the squash they had out in the supermarket. Absolute craziness. They have things called 'Pumpkin Patch' where you can go and get pumpkins and carve them in a little community party kind of thing. They're so into Halloween- I've seen signs for Pumpkin Parties for this weekend! The very start of October! 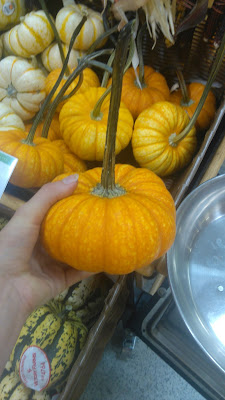 This little guy was labelled as a 'Pie Pumpkin', and it was very very cute. Peter, one of the boys on the cycling team has gone and got one just like it for Greta. He's very much in love with her, but so is every other boy she comes into contact with- it's the funniest thing because she's completely oblivious. Kalie and I have such a laugh about it.

Training wise we're doing well. Most weeks we do a tempo run for three miles, and my target time is usually six minutes a mile. Last time I did 17.42, this time 17.37 so it's all good improvements. We're starting to move into more speed work towards our bigger, faster races. I hope we keep up doing longer runs as well though, not just always speed because over the years I've found my running goes best when I do more endurance work, but I'm sure Coach knows what he's doing with us.

I've handed in my first bits of work for Drawing and English! (Still working on that drawing music as shapes thing, it's far too weird). Drawing was meant to be an 8-hour still life of these lads- 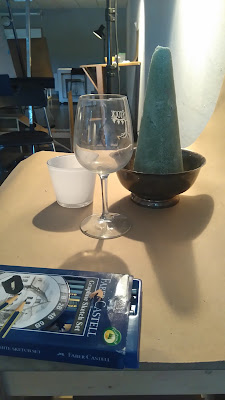 8 hours my bottom! It took forever! I hardly did anything else all weekend. 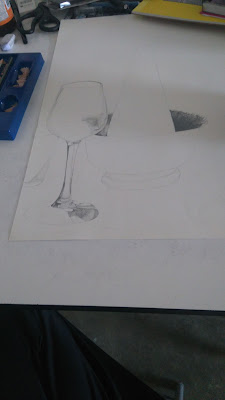 I totally forgot to take a picture of it finished, but I will when I get it back. These are a couple of work-in-progress pictures (and a beautiful shot of my chaotic desk). 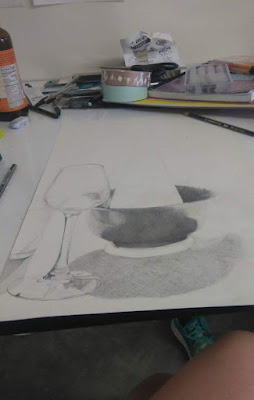 A bit stressed over this submission though. When we were doing the group critique in class he was talking about how he wanted line work, not shading. I didn't shade mine, it's all cross-hatching, but I did smudge it to soften the edges a little, so I hope he doesn't mark me down for that.

I've noticed recently that the American number plates have their State of origin on them, and a lot of them have a little line about that State on them, so one from Texas says 'The Lone Star State' on it, one from New York says 'The Empire State', ones from Georgia have pictures of peaches, because we are the peach State. I've seen 'First in Freedom', 'First in Flight' and 'The First State', although I can't remember which those correspond to. Virginia doesn't seem to have a particular distinguishing feature, because I've seen ones saying 'Virginia for Artists', 'Virginia for Lovers' and other ones. I really think this is a good idea to adopt at home. We could be 'The Scouse State' or something...