We did it again!

Second race of the season; University of North Georgia's invitational, a 5k for us. Coach had promised us a bit more competition than last time on the course described as "flat and fast". Turned out it wasn't really either. We were running at 8.15, at a place called Gainsville, which is about an hour away in good traffic. At 5.40, the time we left, there was NO traffic. Of course not. Who other than us wakes up at 5am to go running? We were all pretty sleepy. I was actually a bit worried about my race, because I don't like morning runs at all and I think even in training I struggle to get up to speed properly when I'm not awake. 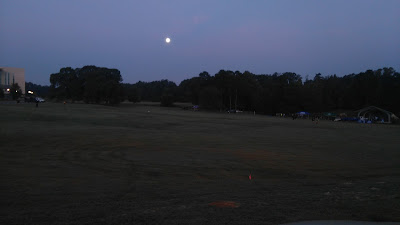 Taken with the dark-scene thing active on the camera, this is the start/finish field with the moon overhead. Sunrise had just about begun in the opposite direction. We snoozed on our groundsheet for about half an hour before we had to start warming up. The start was quite bizarre. They did a silence for some service people who had gone to North Georgia, then they did the national anthem. I've never known anything like it. 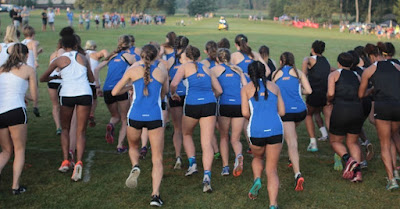 This is the start- I pinched it from North Georgia's website, so it's mostly their people, but you can just about see the back of my head as I run off like a startled rabbit (white vest, short hair, far left of frame). So yeah, 5k, two laps and a loop of the start field. We had a quadbike! A 'lead vehicle' to make sure we were going the right way. On the first loop it had a lad in a great big bird costume on it. Mascots. Apparently that kind of thing is normal practice, so I had a blue bird staring at me for 400m. 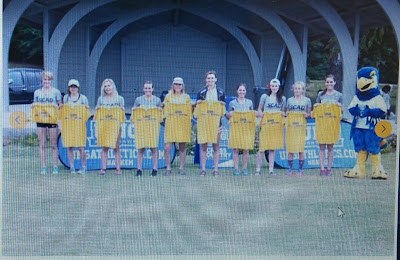 Sorry about the disastrous quality, I haven't got proper photos yet, but you can see a great big blue bird here. Nigel the Nighthawk, mascot of North Georgia. That photo is the top ten finishers, we got t-shirts, and I managed to hold mine wrong. What a tourist. But I won! And not only won, but set a new course record by 55 seconds! 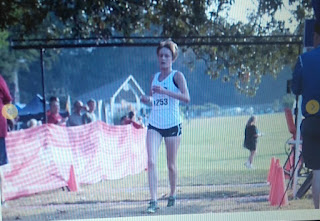 Another shocking photo, but that's me looking totally chilled with some impressive tan lines (look at that leg) coming out of the finish with no one else in sight. I was over 20 seconds ahead of Kalie, who came in second. The first four girls all apparently broke the old course record. Our team did brilliantly; 1st, 2nd, 3rd, 8th and 9th to defend the team title they won last year.

The terrain for this one is probably most comparable to Royden Park- short grass, dusty trails and rocks and tree roots all over the place. I bashed my foot on a root, and it was a painful affair in spikes. Don't really know why we were in spikes. At home it would be multi terrain or something, not needing spiky shoes. 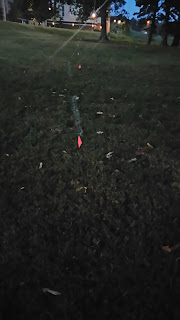 This was taken in the almost-dark, so it doesn't show up too well, but they mark out the courses with these tiny little flags on wires that get stuck in the ground. It's the maddest thing, and a total nightmare if it's shady or whatever, because you can't see the little poles, so if the flag is stuck in at a funny angle you catch them with your feet. Or at least I do, but I'm not the most coordinated person. 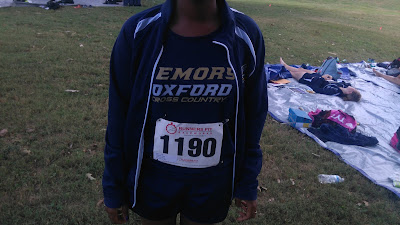 Oh and this was funny. Look who turned up to race us! The amount of place names they've just pinched over here from back at home. No imagination.
Posted by Unknown at 14:16