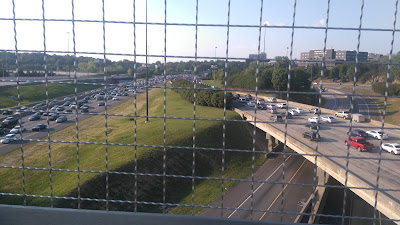 A great big traffic jam (it looks spread out, but trust me, it wasn't moving) at around 7pm. Who knew that was rush hour?

Atlanta is bizarre in that it's a city with a not much smaller population than London, but it feels a lot smaller. This is probably because it's basically laid out along the motorway (freeway, interstate...I don't know?) so it's looooong rather than all-round big. I realised that we just inhabit a tiny corner of it, and it's such a strange way to live; our own little idea of what Atlanta is somewhere in the middle of its enormity. There doesn't seem to be a city centre as such, just districts like Midtown that span the motorway, and then 'neighbourhoods'- residential areas and small shopping centres, individual communities in their own right.

The city is arranged for drivers. Everything you want is just off the motorway. So the other day I wanted to go to ASDA, which is called Walmart over here. I knew that before I came here, but despite having mentally linked the two I keep forgetting. I asked Greta the other day "what's that daft name you guys call ASDA?" and she gave me the blankest look going. But yeah, Walmart. About two minutes away up the motorway; about an hour away on foot on the most circuitous, bizarre, but (somehow) quickest route on foot. Atlanta is for cars. Incidentally, the Americans pronounce route as 'rout'.

The motorway is crazy as well. There are like a million lanes, but your lane seems to be to do with when you're coming off, not anything to do with your speed, so despite the wideness of the road the traffic doesn't move that fast (hence the weird, spread out traffic jam).

Yesterday we had team photos, which was no fun at all because golf went in front of us and they took nearly two hours to do something we managed in fifteen minutes. The guys made me laugh though; they keep joking about how I must be James Bond, or some other international spy, and the pictures would blow my cover.