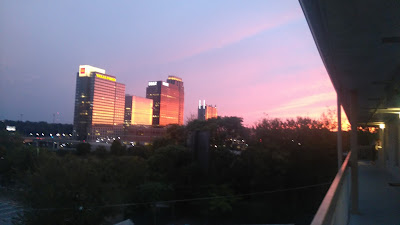 We started classes! How exciting. It's only Tuesday, so everything so far has been introductory stuff, which is reasonably boring, but we started drawing wine glasses and things like that in my drawing class. Everyone seems to deathly serious; the professors all say things like "This is not an easy class- As and Bs are earned," which sounds ominous, but Greta says it's probably not that difficult. We had a very interesting chat last night where she basically said the American high school system is madness. Apparently if you just do the homework and whatnot you're nearly guaranteed an A, so kids go to college having never really done much work, so the professors try to put the fear of God into them. I hope she's not exaggerating.

And we have life drawing every Friday! Such deep joy. For something that really ought to be quite an awkward experience it's so much fun. I was just reading an article for my English class later on, which was telling me that in order to write with style I must sound like myself. This must be an American thing; if I were to turn in essays written as I speak I'd probably fail, and style be damned.

The photograph at the top is of the skyscrapers at Atlantic Station- the sky last night was the most fantastic array of colours (probably air pollution doing some dirty work there), it looked like Andy Warhol had got out his highlighters and done to the sunset what he did to Marilyn Monroe. My camera didn't record it properly, stupid thing. But if you start with the assumption that all the buildings are usually basic building shades, you can tell that the sky was throwing some serious shapes. (Writing how I think, it's stylish). 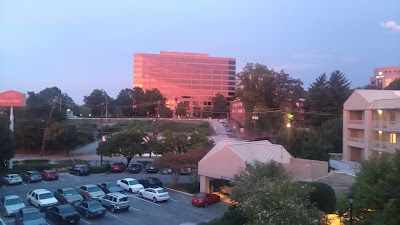 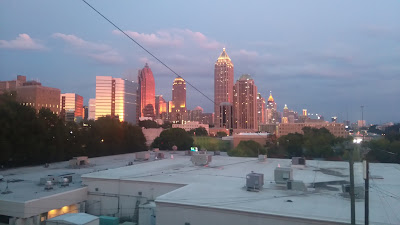 And I did some modelling! For the gym! Leslee, the formidable gym manager asked if I'd take part in this photoshoot thing happening there, for publicity or something and she's a difficult person to say no to. So I ended up stood on a mat, pretending I was doing weights with a yoga ball until my arms were about to fall off, and trying to make that look natural. I was hoping we might have got to see the pictures by now, but if I get one I'll put it up for general amusement purposes.